The “Creative Bureaucracy Festival” attracts once a year the innovators from the Public Sector on all levels (from the educator to the Minister, from the municipality to international organisation) and the interested public to an extraordinary festival in Berlin. 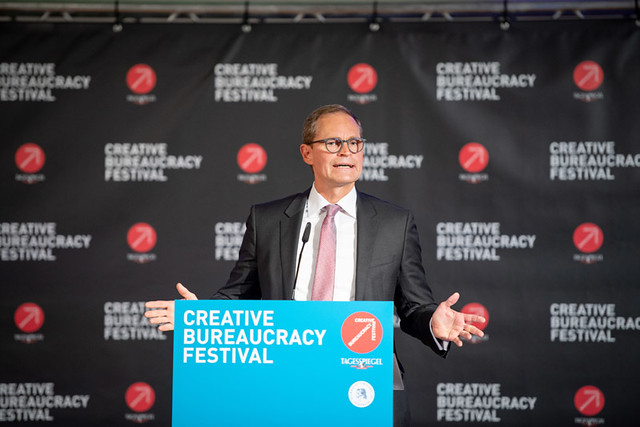 Now it is official: two days at the Humboldt University Berlin, nine stages, 100 programme items, 165 outstanding speakers from all over the world, more than 1,200 guests, a spectacular farewell over the roofs of Neukölln – they really do exist, the creative bureaucrats.

On 7 / 8 September 2018 the first Creative Bureaucracy Festival took place and encouraged visitors to improve the Public Sector with new ideas and initiatives and to network.

The Creative Bureaucracy Festival was opened by Governing Mayor Michael Müller and Berlin’s biggest job interview, during which Michael Müller was promoting Common good as a career and the Land Berlin as an attractive employer. During two festival days many best practices of Creative Bureaucracy from all over the world were presented, which highlighted how administration can be successful and the huge potential in the Public Sector.

The learnings from failures of public authorities were presented, amongst others, by BER CEO Engelbert Lütke Daldrup and ex Lageso head Sebastian Muschter during the so-called FuckUp Night on the first evening. During the farewell party on the next day the Creative Bureaucracy Festival was brought to a fitting conclusion in the roof culture garden Klunkerkranich.

Here you find everything about the Creative Bureaucracy Festival 2018:

Stay up to date - subscribe to our e-mail updates:

Stay up to date - subscribe yourself to our mail updates!


You can unsubscribe at any time.